Mycorrhizal inoculum is a soil amendment which facilitates the return of native mycorrhizal fungi to depleted sites and is particularly effective on shallow or nutrient poor soils. Inoculum includes spores, mycelium and mycorrhizal root fragments of one or more species of mycorrhiza (genus Glomus) and is available in a variety of regional suites (Desert, Basin and High Plains) for site-specific applications.

Mycorrhizal inoculum is housed in a dry granular carrier and is able to be applied hydraulically within a wet hydromulch slurry, or broadcast dry with seed spreading equipment. Inoculum should be applied just prior to, or in the same application as seeding.

Research on mycorrhizal inoculum over 25 years proves that plants including this agricultural inoculant are more rigorous, display increased drought and disease resistance, and are consistently better at absorbing nutrients and water.

Including these soil amendments means that plantings need fewer pesticides. They grow heartier, with a better overall response to environmental stresses.

Since 80% of all plant species form associations with a vast network of naturally-occurring fungi, mycorrhizal has a built-in place in the plant ecosystem.

You already know that adding fertilizer to the soil is an essential part of promoting new vegetation and plantings. But nutrient availability relies on the chemical and physical properties of soil, climate, and crop type.

What Does “Inoculating” The Soil Mean?

To understand how mycorrhizal inoculum works, you need to know about the process of soil inoculation. When you inoculate shrubs, plants, or the soil with certain microbes, bacteria, or fungi you’re adding effective amendments or microorganisms to the soil.

In areas with degraded soils or harsh climatic conditions, inoculating the soil allows plantings to survive infections, toxins, and chemically degraded soil conditions. Inoculation is also useful as a response to stave off encroaching species that are non-native to the soil. Inoculation of the soil can also help stave off infections or invasive toxins, among other benefits.

The process of inoculation is integral to seeds that are growing on newly-reclaimed soil, or soil that doesn’t have optimal growing conditions.

Plantings rely on so much more than soil chemistry. There’s an entire microbiome of symbiotic relationships between plant roots, soil, a leaf’s stoma, and the microorganisms that inhabit the soil. 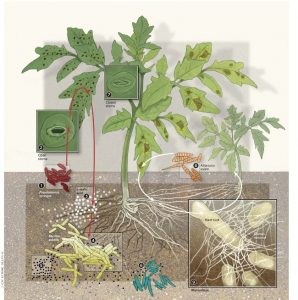 A symbiotic relationship governs the plant roots’ reactions to beneficial fungi and bacteria, which help plants form an immune defense response that wards off harmful bacteria from further infecting the plant.

That’s the goal of inoculation. It’s a method that helps plants thrive. Research on inoculated versus non-inoculated plants shows that plantings are more robust, with higher levels of growth, more consistently through the season.

Inoculation enhances the soil’s microbiome, helping microorganisms to build symbiotic relationships with plant roots. It’s a feedback system that allows for communication, inoculation from infection, and nutrient and water re-uptake.

Mycorrhizal inoculum is part of that feedback system. Though it’s a fungus, its tiny filaments bind with roots and support with the root system through a network of its own.

What Is Mycorrhizal Inoculum And What Does It Do?

Using its “hyphae” or filaments, the mycorrhizae then access water and nutrients in the pore-space of the soil, feeding these directly to the root system.

What’s in it for the fungal network? Plants receive protection from environmental drought or increases in soil salinity while mycorrhizae get the nutrients needed for survival — specifically carbohydrates.

In a symbiotic cycle, the intake of carbohydrates helps the fungi to synthesize and excrete molecules like glomalin, a kind of glycoprotein. In soil environments, glomalin helps improve soil structure and increase organic matter content.

There are two kinds of mycorrhizal fungi. One is responsible for root association while the other catalyses metabolic exchanges:

One of the most common types of endomycorrhizal fungi is arbuscular mycorrhizal (AM), which are most prevalent in the soil itself. They form little arbuscules or finely-branched structures, and the metabolic exchange they spark is a form of communication between the plant and the fungus. 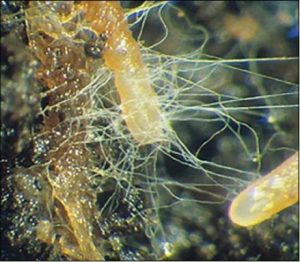 Studies show that inoculating with arbuscular mycorrhizal promotes revegetation in semiarid ecosystems that are prone to drying out.

Benefits Of Using Mycorrhizal Inoculum For Your Soil

Little things run the world. You may not see them at work, but they’re present, responsible for creating an accumulative benefit for the “host.”

That’s the way mycorrhizal inoculum works. You’ll be hard-pressed to find commercial- and agricultural-scale production of crops without the use of mycorrhizal fungi because they’re such a useful tool.

After all, this natural specimen has been lending a hand to plants for 450 million years. In the reclamation and rejuvenation of denuded and eroded soil, mycorrhizal inoculum provides several essential advantages to new plantings take root.

New plantings are a vital part of improving soil chemistry and firming up the soil to protect it from further erosion.

Mycorrhizal’s network-like structure is its most powerful feature. It’s through this network of fine filaments that nutrients can travel, exchange, and convert into metabolic reactions.

Soil structure is part of soil health — it indicates how much water can get into the pore-space, how permeable to air, and how nutrient-rich it is. The complex networks formed by mycorrhizae help to provide better resistance to compaction, higher microbial activity, and better root development.

The hyphae of the mycorrhizae act like a biological glue, maintaining healthy soil’s physical properties.

Mycorrhizal root systems increase the absorptive area of a plant’s root system up to 1000 times the soil’s starting structure.

This allows plants to tap into the true resource that soil is. The mycorrhizal fungi absorb, and through their network, transfer 15 major macro- and micro-nutrients necessary for plant growth. This includes phosphorus, iron, and nitrogen, three critical components of plant growth.

Thriving plants call for more than robust soil structure. Another constant plague on healthy plants is disease and pathogens. Mycorrhizal roots acts as a physical barrier against the invasion of root diseases.

This is part of the inoculation process. The fungi attack pathogens and destructive organisms by producing their own antibodies designed to immobilize these organisms.

In a study of willow trees supported by mycorrhizal, 90% of those uninoculated died from a common disease organism, Fusarium. Survival rates for willows treated with mycorrhizal fungi were 95%.

Since mycorrhizae increase nutrient uptake, this also optimizes the use of fertilizer. Applications of fertilizer can reach new seeds in a more efficient and even manner, and there’s less needed to provide the same effect.

This can also reduce the cost of maintenance and upkeep of large-scale crops. Mycorrhizae diversity is an essential factor in fertilizer use because not all fungi are created alike. Some are better for treating drought, while others are better at protecting against extreme temperatures in the soil.

Mycorrhizae thrive on and require different forms of fertilizers to colonize and thriver quicker. Your use of compost, compost teas, no-till methods, humates, seaweed extract, and fish fertilizers increase the microbial diversity in the soil. A more diverse ecosystem promotes a denser hyphal network, which, in turn, accelerates nutrient uptake.

The density of the hyphal network is useful for natural soil erosion as well. While the mycorrhizal isn’t singularly responsible for holding the soil together, it does create more connections in the roots and makes plantings more dense and firm.

How do you get started reaping the benefits of mycorrhizal inoculum for your soil?

Since it’s a naturally-occurring fungus, there may already be some present in your soil, colonizing their little hearts away. The first thing you’ll need is a soil or crop test.

If they’re already present, maintain and increase diversity. When sowing seeds, transplanting, inoculating a bed or land before planting, work mycorrhizal inoculum into the top four to six inches.

If your land or garden has been repeatedly tilled, left fallow, or if your soil reveals a degraded chemical structure, you can start to re-establish and rebuild these populations with commercial inoculant applications from Granite Seed.

We recommend that you employ a no-till practice, especially in the first year, so that the network of filaments can grow dense. Continue with compost, and you’ll have thriving, lush plantings in one season.

Inoculated soils improve year after year. Contact Granite Seed today to learn more about how planting aids like mycorrhizal inoculum can completely transform the health and longevity of your soil and seeds. 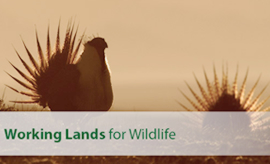