Not all erosion looks the same. Something as small as a raindrop can affect soil adversely: splash erosion, for example, can scatter tiny soil particles as far as 2 feet from their original location.

Meanwhile, in deserts, wind erosion can polish rocks and cliffs until they’re smooth. Arches National Park in Utah is just one result of a 65 million year-long process of wind and rain erosion. While it carved these beautiful rock and land formations visitors flock to see, these processes are also responsible for the fall of Wall Arch in 2008.

Globally, the rates of soil displacement due to water erosion are the highest they’ve been, and water erosion is also one of the most common causes of soil loss and land change around the world. This includes coastal erosion, valley erosion, and the interrelated rill and gully erosion.

Rill and gully erosion, in particular, are quite insidious and slow processes that are easy to miss over time. They may not draw the same kind of attention that landslides triggered by mass wasting might. Yet, rill and gully erosion create runoffs of their own, which eventually widen and evolve into large-scale channels that can pose dangers to human and wildlife.

What is Rill Erosion?

The signs of rill erosion appear mainly on hills, and appears as a 0.3 to 3.9-inch deep set of channels that run parallel but may converge at some points. Runoff water forms these channels as it concentrates and then flows down a slope.

There is a distinct flow pattern to rill erosion which means that the water runs through these predictable, if disconnected, parallel channels. 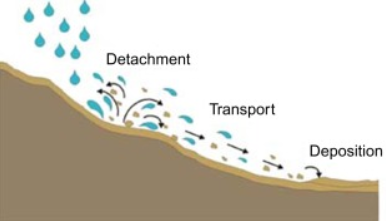 Over time, the soil profile wears down and becomes increasingly thinner with each rainfall. Once the slope tapers off and flattens at the base, soil particles sit there, deposited into a terrace or are carried further into principal waterways.

Once the channels formed by rill erosion reach four inches, they become gullies. The width, depth, and flow strength of gullies are much more significant.

At this point in their development, rill eroded channels displace soil and nutrients, and the sediment carried along can cause some clogging. However, these channels are not yet wide enough to be a significant issue.

Rill erosion is most noticeable on a hillside or a slope. Once it accumulates on the surface of soil sitting on a slope, water runoff can’t help but flow downhill.

In a way, rill erosion is the consequence of poor water infiltration into the soil. This, in turn, is caused by a poorly structured soil makeup that can’t absorb all the water delivered. It’s a trickle-down effect. 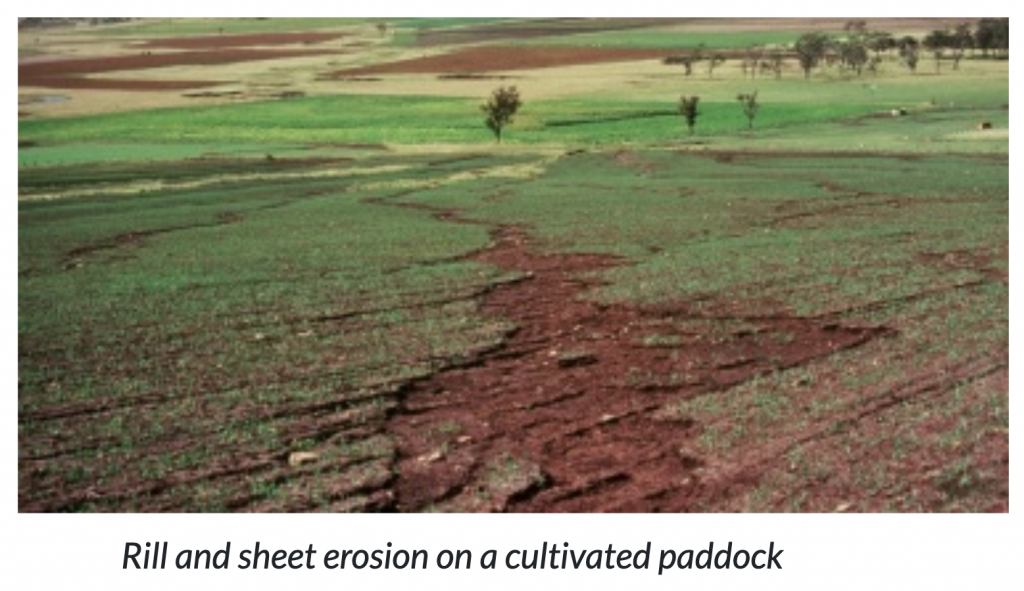 Factors that trigger rill erosion include:

The most compelling reason to address and curb rill erosion is that it’s the first stage of a more severe issue called gully erosion. Once channels reach a depth of four inches, thanks to water flows carving a track in the same place, there’s no going back — you’ve officially entered gully erosion.

What is Gully Erosion?

In theory, if there were no underlying rock to stop erosion process, gullies could be as wide and deep as the water power flowing through them could cut and shape them to be. Gully erosion is a highly visible form of soil erosion which can indicate an imbalance in regular watercourse flow. Larger (and faster) than normal water flows cause steep-sided watercourses which then widen further during periods of heavy rainfall. 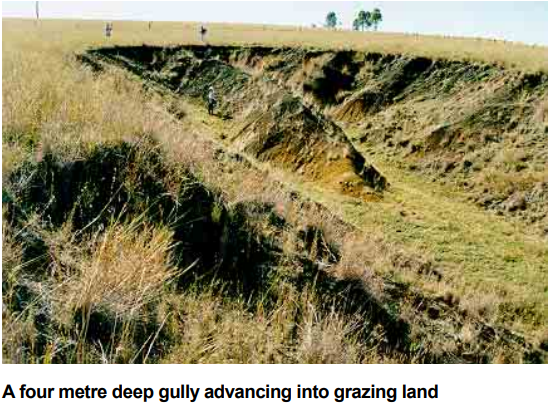 As the water flows with full force through these gullies, the cycle of degradation continues. Soil particles are picked up and deposited elsewhere, causing blockage and siltation in waterways, dams, and reservoirs.

Suspended sediments also include all-important nutrients and pesticides, which then reduce water quality. Once these fine deposits of soil clog groundwater aquifers, they can pollute main watercourses and negatively affect the breathing patterns of aquatic life.

Besides these issues, the harmful effects of gully erosion include restricted land use, reduced soil productivity, damage to roads, fences, and buildings, and even extremely high populations of pests such as mosquitoes around gully-prone areas.

A whole range of factors trigger gully erosion, including:

Once a gully becomes wide and deep enough, they’re a hard problem to fix and heal. If you can catch and repair the land during the early stages of a newly formed gully, you may be able to stop it from spiraling to the point of no return.

Gully erosion affects more than just the surrounding land and the ecosystem. The unsightly channels that the eroding process creates can reduce amenity and property values, as well as destroy any agricultural capacity the land has for farmers.

How to Control Rill and Gully Erosion

Even though rill erosion is not as extensive a problem as gully erosion, there are situations in which rills can transform into gullies. As you can see, rills that begin at the top of a slope can quickly disintegrate and branch off into their wider gully counterparts. 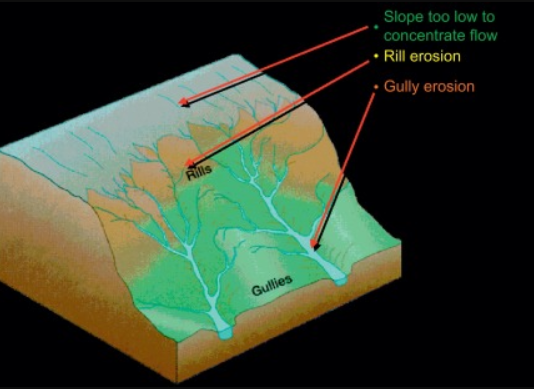 To fix the issue at either the rill stage or the gully stage calls for a two-pronged approach: first, to reduce and re-divert the flow of water into stable drainage lines, and secondly, to then stabilize the gully itself.

You don’t have to look farther than natural solutions to execute on both of these strategies:

Until the restoration of gully-eroded areas is complete, there can’t be any livestock feeding or agricultural farming projects nearby. Erosion control methods and revegetation are effective processes but they take time — especially if the damaged area covers several properties and needs some level of cooperation and collaboration from individuals.

Conclusion
A more desirable alternative to controlling gully erosion is to stop it from forming in the first place. There are a variety of strategies and tools that can effectively prevent rill and gully erosion but the overarching priority must always be to employ good land management practices. Only by incrementally improving soil infiltration rates and providing good plant cover can we prevent the problem from arising.

In tandem with these practices, Granite Seed’s erosion control products give you the ability to establish short-term land repair and land-healing strategies. Techniques like erosion blankets, or high-quality planting aids can provide the stability and protection that gully-eroded areas require as they rehabilitate.

Contact Granite Seed or browse our catalog to learn more about rill and gully erosion control techniques that promote long-term, holistic improvement of the land and soil.